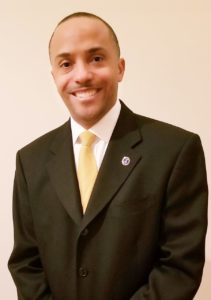 Reverend Richard ‘Rick’ A. Greenlee, Jr. gave his life to Christ at the age of 10 years old, and was baptized shortly thereafter at the age of 11. A native of Winston-Salem, NC, and educated in the Winston-Salem / Forsyth County Public School System, he spent his formative years as a member of the United Metropolitan Missionary Baptist Church, under the leadership of Reverend James D. Ballard, and was an active member of the Youth Department. A proud 1987 graduate of Carver High School, he further matriculated at the University of North Carolina at Chapel Hill, completing an Honors semester at the London School of Economics and Political Science, and earning a Bachelor of Arts degree in Industrial Relations. Upon graduating, he worked in the banking industry as a project analyst.

Answering a call that many in his family have heeded, he applied to the United States Air Force Officer Training School and received a commission as a Second Lieutenant. It was during these early years in the military that he united with the Victory Full Gospel Christian Center in Ocean Springs, MS. While there, he was filled with the Holy Spirit and sat under the anointed teaching of Elder Carlton G. McCarter. Already a leader in the profession of arms, it was here that he served in church leadership for the first time, as president of the Brotherhood Men’s Ministry. After completing a Master of Education degree in Education Leadership at William Carey University, and subsequently assigned as an ROTC Assistant Professor of Aerospace Studies at North Carolina A&T State University, he united with the Greater Cleveland Avenue Christian Church, and served under the spiritual covering of Bishop Sheldon M. McCarter.

Following in the footsteps of both his paternal and maternal grandfathers, he was ordained a Deacon in 1998 and eventually served as one of four captains over a board of sixty deacons. During this period he did post-graduate study in Curriculum and Instruction at the University of North Carolina at Greensboro. He was then ordered to a remote assignment at Thule Air Base, Greenland, where he led a year-long Bible study, participated fervently in the Chapel community, and hosted a weekly Gospel music radio program.

In 2001, Deacon, and at the time, Capt. Greenlee, was honorably discharged from the Regular Air Force, and shortly thereafter joining the District of Columbia Air National Guard (DCANG), relocating to Maryland. As he made this transition, God showed Himself faithful and answered his prayers for a new church home by directing him to the Lion of Judah (LOJ) Church, pastored by the Reverend Frank L. Gibson III. Quickly he found himself leading the Men of Judah Men’s Ministry and serving again as a deacon. Shortly after moving to the Mid-Atlantic, he co-founded and became the co-leader of Men on a Mission – a fellowship of men who studied and encouraged one another, being led by Proverbs 27:17: Iron sharpeneth iron; so as a man sharpeneth the countenance of his friend.

Rev. Greenlee was further blessed to lead the weekly Salt and Light Bible study with his fellow airmen, soldiers and civilians at the D.C. National Guard armory. After serving as the Chairman of the LOJ Diaconate Ministry, he accepted his calling to preach, was licensed 2008, and was ordained 2009. He has a burden for serving the Kingdom through outreach to the homeless, incarcerated, elderly and sick and shut-in and completed a Master of Divinity at the Howard University School of Divinity in 2012.

He currently serves on the Ministerial Staff of Hear the Word Bible Church in Bowie, MD, under the dynamic teaching and preaching ministry of the Rev., Dr. Thomas E. Cunningham, where he leads the Prison Ministry and is active with the Men’s Ministry. A Lieutenant Colonel in the US Air Force, he is currently assigned as the Chairman, Department of Aerospace Studies and Commander of the Air Force ROTC detachment at Howard University. Rev Greenlee serves on the Board of Directors with the Haiti Micah Project, a feeding, housing and vocational training program in Mirebalais, Haiti, and is an active member of the Alpha Phi Alpha Fraternity, Inc., Pi Upsilon graduate chapter. He is the devoted husband of the former Rhonda L. Baldwin of Hyattsville, Maryland. They have a son Elijah M. Greenlee, a college student studying Business Administration.