a 7.0 magnitude earthquake shook the foundations of Haiti to eight miles below its surface. For three weeks, aftershocks of 4.5 or greater terrified survivors. Unable to gather reliable statistics, the number of dead ranged from 100,000 to 316,000 people. 80.000 government buildings, records, schools, churches, homes, businesses were crushed.  What little infrastructure existed, was devastated.  In a mere 30 seconds, the already poorest country in the western hemisphere, would never be the same.   Few can forget the television coverage of the desperation and suffering that so inspired the world community to donate. 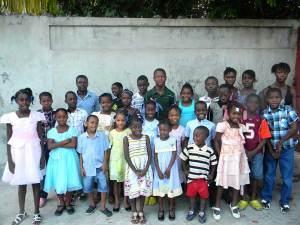 Now five years later, the resilience of the Haitian people and the support of the international community have made a significant improvement. With the rebuilding there has been progress in infrastructure, housing, schools, and businesses. School attendance is increasing, health statistics are improving, and technology opportunities are emerging.  Officials are developing new training for employment in tourism, agriculture, health care, and construction.

The future of Haiti belongs to its young with 50% of Haitians under the age of 18. Over 80,000 people still live in tent cities.  Infant, child, and maternal mortality rates are high. Cholera, introduced into the country in 2010 by UN workers, will never be completely eradicated. According to the World Bank, six out of ten Haitians live under the national poverty line of $2.44 per day. Persistent poverty and inequality, environmental degradation, and political uncertainty threaten achievements that Haitians have made over the past five years.

Since 2005 donors, volunteers, and staff at Haiti Micah Project have dedicated their efforts to provide food, water, clothing, education, and healthcare for street children in Mirebalais.  Children at risk for starvation, sexual trafficking, drug abuse, and illnesses are given the opportunity to grow into healthy and educated adults.  HMP Children living in our SAES home are able to thrive, not just survive. After the earthquake, children and families on the verge of death somehow made their way to Mirebalais looking for relief.  The number of children needing our help almost tripled.  HMP, both in the US and in Mirebalais is committed to providing programs to ensure this success.

Watch over all the members of the Haiti Micah Project.
O Lord, as their days increase, bless and guide them wherever they may be.
Strengthen them when they stand.
Comfort them when discouraged-or sorrowful.
Raise them up when they fall and in their hearts may your peace which passes understanding abide all the days of their lives through Jesus Christ our Lord.  Amen