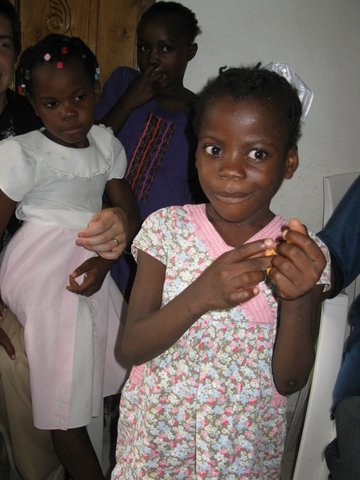 In 2006, I visited Haiti and met a shy 4 year old Lovelie Delanot. Lovelie and her brothers were among the children belonging to feeding program of the Haiti Micah Project. As I visited the feeding program, Lovelie was very sick with a high fever and constant cough. After the children ate, I took Lovelie and her two brothers to the clinic. The doctor prescribed medication and I walked five miles up the hills to Lovelie’s house. What I saw as Lovelie’s house brought tears to my eyes. Lovelie lives in a shack made of sticks and mud. Lovelie’s little body was decaying and screaming for nutrition. Her parents had no ability to care for her, and basically Lovelie was abandoned to the streets, in the hopes of finding food. She like so many young children was at risk of becoming a restavek (child enslavement) or being sexually abused.

Almost 4 years later, Lovelie is now in residence at the HMP/SAES home. She receives 24 hour care with three meals a day. Lovelie will forever have the scars of her childhood, but Lovelie’s needs are being directly addressed. She has hope and a chance for life. Lovelie’s future, like so many of these children, depends upon our support.

Lovelie continues to shine brightly in her new environment. In addition to her good grades at school, the most remarkable improvement in Lovelie?s life is the recovery of her smile. Lovelie?s ability to smile is precisely the reason we need to intervene in the lives of each child living in extreme poverty and help them to feel the love of God. Keep on smiling, Lovelie!