The Haiti Micah Project continues to be blessed by the involvement of faith communities who have taken the children of Haiti into their hearts and minds as a focus of their outreach ministries. Among those communities, Grace Episcopal Church in Alexandria, Virginia, has a long history of outreach and mission efforts toward the poor and disadvantaged.

Months before the disastrous earthquake in January 2010, Grace parishioners became acquainted with the work of Father Joseph Constant, who taught at the nearby Virginia Theological Seminary. Fr. Joseph had developed a program that brought Haitians to the seminary to study for the priesthood, and he brought his students to Grace to introduce his program for helping street children in Mirebalais. Shortly thereafter, the earthquake decimated Port-au-Prince and hundreds of refugees fled to nearby Mirebalais. Grace parishioners immediately responded.

Since that time, each year on Mother’s Day, the Outreach Committee organizes the Haiti Micah Child Sponsorship Event. What began as support from the Outreach Committee for one child has now grown to sponsorships for 70 children. Each year, the Vestry and parishioners at Grace have responded to the needs of the Mirebalais street children, and each year their goal to keep all “their Haiti Micah kids” in the Grace “family” has grown.

In October 2010, when cholera broke out at the United Nations facility just outside Mirebalais, the need for a clean water source became critical. Grace Church coupled with Immanuel-on-the Hill in Alexandria and the Diocese of Virginia on a joint project to finance the structure that houses a new water well and water treatment facility. The new water system is now a clean and safe source of water in an area still threatened by cholera.

In response to the need for post-secondary educational opportunities, Grace has given strong support to the establishment of a vocational school in Mirebalais. In cooperation with the Diocese of Virginia, Grace provided a matching grant in support of a new vocational center.

When the Diocese of Virginia organized its first mission trip for young adults, Grace responded with two participants.

This kind of feet-on-the-ground participation continues. Last November, Grace Church sent an 8 person team to Haiti led by its 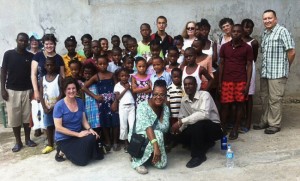 Assistant Rector, the Rev. Leslie Steffensen, and supported by fund raising efforts of the congregation. (see story above) Team members embarked on their “mission of perspective” to build relationships with the children in the Haiti Micah Project and the adults who help care for them, to develop a better understanding of life in Haiti, and to witness God’s work in other successful programs in Mirebalais, Leogane, and Port-au-Prince. Team members gained great respect for the very hard working, positive thinking, and devout people of Haiti, and all described the trip and experience as “amazing”.

Grace is an example of what a faith community can accomplish not only through its own efforts, but in working with other churches toward a common goal of helping children live healthy and productive lives.